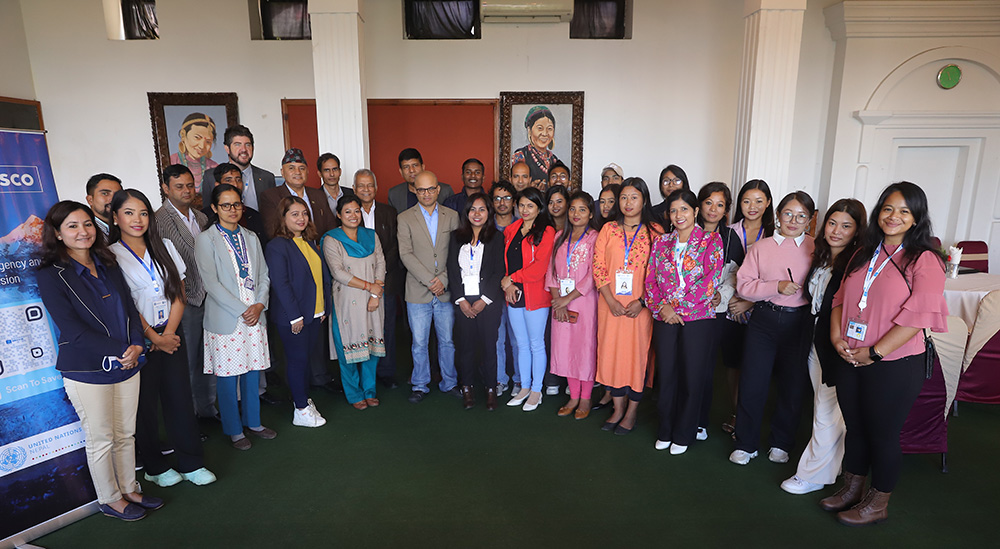 The United Nations Educational, Scientific and Cultural Organization (UNESCO) in Collaboration with the Nepal Forum of Science Journalists (NFSJ) organized a two-day residential workshop from Oct 14-15 at Hotel Himalayan Horizon, Dhulikhel. As a continuation of the series of training and workshops after the Himalayan Climate Boot Camp 2022, the workshop was organized. The main objective of the workshop was to impart the necessary knowledge and skills for participating Science Journalists to produce community-focused evidenced-based stories on climate change including adaptation and mitigation initiatives emerging at the community level.

A total of 15 science journalists (10 Female, 5 Male) from seven provinces participated in the workshop. The journalists were selected from a pool of 35 applicants. The selected participants included a good mix of women, janjatis, and marginalized groups.

The major highlight of the first day included statements from UNESCO Country Representative, Michael Croft including former minister of science and technology Ganesh Shah, the current Undersecretary at Ministry of Education, Science and Technology Shila Khatiwada, and NFSJ Founding President and Program Director Chhatra Karki. The inaugural day included four thematic sessions: Introduction of Climate Change, and its Impact in the Himalayas; Misinformation, Disinformation, and Fact Checking in Science and Environment Reporting; How to identify climate and environmental issues and Climate Journalism, and tips to become an environmental and Climate Journalist which provided improved insights to the participants on various facets of climate change and challenges in climate journalism/reporting in Nepal.

The second day of the workshop included a field visit to Namobuddha Municipality, to understand the nuances of community-based adaptation and mitigation. A third episode of the science dialogue series as a part of the UNESCO-NFSJ collaboration was also conducted on that day under the theme of climate change impacts on agriculture and the ways to adapt climate change risks to farmlands.

“Blending of theoretical and practical knowledge on climate change was a unique model adopted by the workshop. I learned about cross-checking scientific facts, and strategies of reaching out to global climate experts for information among others”, remarked Madhuri Mahato, a participating female journalist from Madhesh Province.

Addressing the workshop, Madhusudan Guragain, Vice-President, NFSJ stated that the workshop might serve as an opportunity for the participants to understand not only the effects of climate change but also to explore how local communities have adapted scientific and innovative methods in the field of climate adaptation and mitigation.

Reiterating the need for a nuanced reporting of the initiatives local communities are adopting to tackle climate change, Miachel Croft, UNESCO representative to Nepal remarked: “There are communities who are battling climate change and they are taking various steps to mitigate the problem. These approaches need to be reported so that other communities are informed and encouraged”.

In her short remark on the inaugural day of the workshop, Dr. Nani Raut, Assistant Professor, Department of Science and Engineering; Head of Agriculture and Rural Development Unit, NTIC, Kathmandu University pointed out the existing gap in the transfer of knowledge on climate change to the local communities and calling for the science journalists not only to report on the incidents but also foster awareness among local communities through effective reporting.

Meanwhile, Ganesh Shah, former minister of MOEST, highlighted the need of linking local issues of climate change and community adaptation to global trends and stressed the need for science journalists to continuously study and stay abreast of the developments in the field of climate science and the environment.